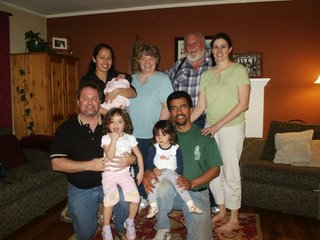 Yesterday we went to the Seattle side of the water and drove around running errands and enjoying the scenery up north. On our way down we stopped at some friend's house in West Seattle, Luis Zuniga and Stephanie Pender. I had the privilege of marrying them in 2002 in Guadalajara. Stephanie is from Seattle and was teaching at a school in Mexico when she met Luis who I lived with while going to language school in 1996. Luis also participated in our wedding in 2000 as one of the groomsmen. It was great to see them and it's always nice to get "caught up" with old friends. They have a two-year old daughter named Isabella...she's a cutie! Her and Rebecka had a great time playing together and again, Rebecka did not want to leave. She loves going out and visiting people. We had authentic Mexican tacos for dinner...WOW! Great stuff! Thanks Luis and Stephanie! We had a wonderful time.
Posted by The Silbermans at 11:23 AM