Week three was so far the most exciting week.  With 130 students to start, there was the ice-breaker at the beginning that allowed the staff to disperse to the locations they were to have their organized game.

First, at the baseball field in Cofradia,

From there the student hopped in their trucks and headed to Arrayanes for a RETO classic, "Gladiators".  In Gladiators, one team is placed in the corner of the speed soccer court while all the other teams (team by team) have to run the course to get to the "goal."  As the students run through the course, the team in the corner is throwing water-balloons at them!  Such an amazingly fun game!  And it paints such an incredible picture of how lies get thrown at us daily.  Sometimes, we don't even realize they're a lie, but the hit us and, unfortunately, sometimes we believe them.

After everyone was soaking wet, they headed to the basketball court in the center of town for another RETO classic, The Fear Factor Banquet!  Not much to fear this year, but having to suck the innards out of a raw egg, then drink a small Pepsi.  Yuk!  The atmosphere was incredible and loud!  The students had so much fun!  The black team took barely took this one away from the green team.  What's the moral?  Well, sometimes we need to make sacrifices for the team!

The Refuge was electric with worship and a message to tie everything up.  Then, the votes!  After two consecutive weeks of being chosen to do chores, the grey team was free!  The white team had to do chores this week.

ADMISSION IS FREE
BECAUSE OF PEOPLE LIKE YOU
WHO CONTRIBUTE TO THIS MINISTRY.
PLEASE CLICK HERE TO DONATE TO
EL RETO

Posted by The Silbermans at 12:05 PM No comments: Links to this post

Week two of EL RETO 2018 was packed with 170 students!  "La Caminata" or, "The Walk" was the activity.  This year, as the students kept together (or at least were supposed to) walked through the streets of Cofradia, extremely muddy back roads, and rising rivers.  Along the way, there were obstacles and games they needed to accomplish before continuing.  All of this happened in order for Luis to talk during The Refuge time about how life is a journey and sometimes we encounter difficulties, but it's easier if we have people around us to help us get through them.  Choosing Truth (this year's theme) will help us even more to make wise decisions and the path will sometimes be a little smoother.

A few students took a wrong turn, but in the end they were brought back with the help of some staff.  The power went out so some of the Refuge activities were cancelled.  It turned out to be an exciting time with a lot of teaching.


ADMISSION IS FREE
BECAUSE OF PEOPLE LIKE YOU
WHO CONTRIBUTE TO THIS MINISTRY.
PLEASE CLICK HERE TO DONATE TO
EL RETO
Posted by The Silbermans at 8:39 AM No comments: Links to this post

The first week of the RETO (Challenge) was a success in terms of the turn out we had.  One hundred and thirty students arrived as they formed 6 teams.  About half of these students come from the cities of Rosamorada, Paramitas, and Tuxpan.

The theme this year is "Choose Truth".  We want to help the students know the truth.  We get bombarded daily with lies that are all around us and, unfortunately, they usually are formed in our mind.

After registering the students, there was a fun ice-breaker that many got involved in.  From there, the students went to three different locations (San Marcos town center, San Marcos soccer field, and the Cofradia High School basketball court) where they participated in a number of different activities.  Before heading up to "The Refuge" where all the teams come together for singing and a message, the teams met with a counsellor where they were able to engage in a small group talk about what we can learn through the activities of the day.

Finally, one by one the teams passed through a curtain into the voting room and selected another team to do chores.  Once they voted, they went back outside, down the stairs, and stood in the courtyard waiting for the verdict.

It was an exciting time!


ADMISSION IS FREE
BECAUSE OF PEOPLE LIKE YOU
WHO CONTRIBUTE TO THIS MINISTRY.
PLEASE CLICK HERE TO DONATE TO
EL RETO

Posted by The Silbermans at 12:15 PM No comments: Links to this post

Greetings from Cofradía, Mexico! We arrived on August 17th and got to work right away meeting with the pastors who form part of our ministry, La Cofradía United.  The girls are back in school doing very well and this is Emma’s first year participating in the annual youth outreach, EL RETO, which started on September first.

Last month, we asked you to please pray for... 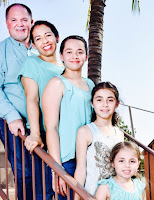 THANK YOU FOR BEING PART OF OUR TEAM
AS WE RAISE UP LEADERS TOGETHER!!

Posted by The Silbermans at 7:21 AM No comments: Links to this post