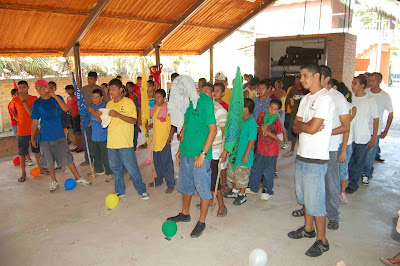 Eleven more students came out to participate this week making a total of 68 students who have participated in EL RETO this year! We are excited about the number of different students who have a chance to hear about God’s Word and learn practical ways to overcome life’s difficulties.

We started this week out with each team captain sharing a devotional with their team. This is a great opportunity for the captains to gain experience sharing God’s Word and applying it to EL RETO. To see the students involved in this is something that excites me a lot! 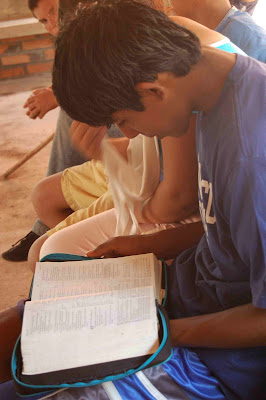 One of the challenges for this year is choreography to a musical track that has no words. To make it even more challenging, they have to make up their own words. This is definitely going to be an adventure for some. They will present it at the FINAL RETO on September 27. We gave them some time this week to practice their choreographies at the beginning of the meeting. 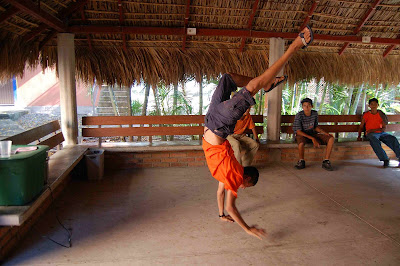 Gollito practicing one of his moves for the choreography.
While they were doing this, we had a separate challenge for them individually as groups; Deal or No Deal. One by one, the teams came into a room with me where I hooked up to a Deal or No Deal game on the internet. The team that made a deal for the most money won this game, immunity of chores, and left first on their second race of the year. The winners were The Messengers making a deal for $72,000 while their briefcase unfortunately had the $1,000,000! The next place was all the way down to $10,000. Last place, $75! It was fun and exciting as they had to make decisions of whether or not to continue with the risk or take the deal given to them. 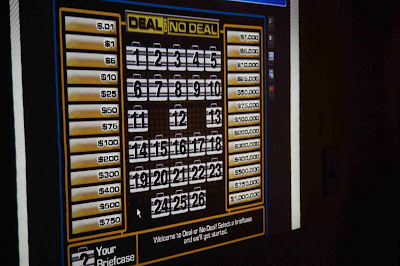 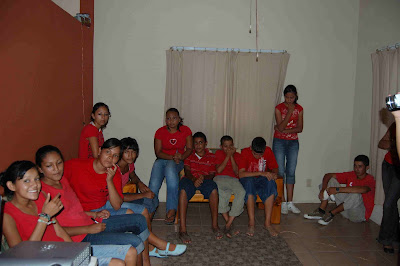 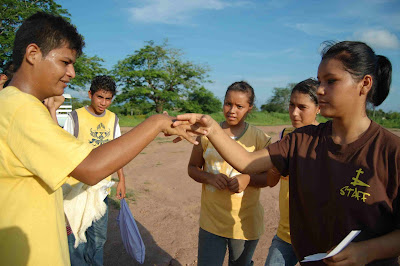 Pedro and Mili at the third stage of a nine-stage handshake.
Watch the video here with Angel and Mili...
At third base, each person on their team had to eat one huge marshmallow in order to advance to Home. 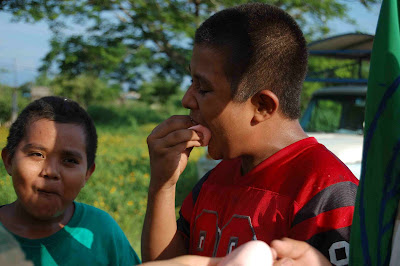 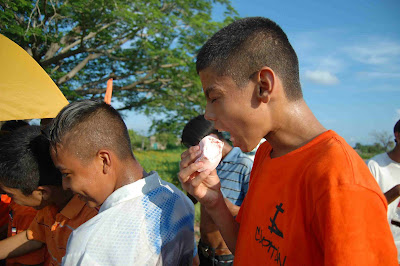 Gollito about to take a bite. 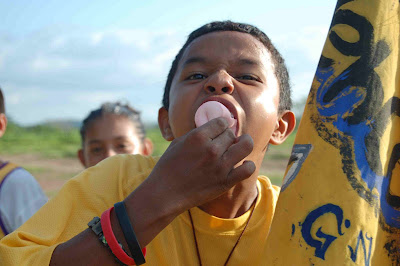 Francisco...don't hurt yourself!
At Home, they got a note telling them to go to the bridge between Cofradía and Arrayanes with one of the staff members. They had to walk, run, or hitch a ride. Unfortunately, we ended up giving them all rides because we were running short on time for the event that was to take place in Arrayanes. 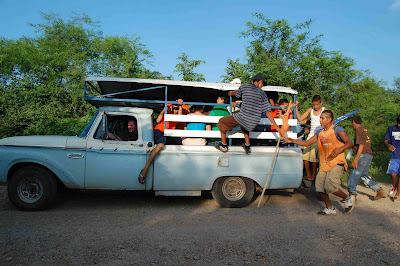 Arriving at the bridge.
Once they reached the bridge, they arrived at a fork in the road with a sign that said, “Tierra o Mar” (Land or Water). If they chose land, they had to memorize a series of symbols, cross the bridge, and put those symbols in the same order as they were on the other side. If they couldn’t remember, they had to go back and forth until they got it right. Two teams chose “Land” and paid for it. 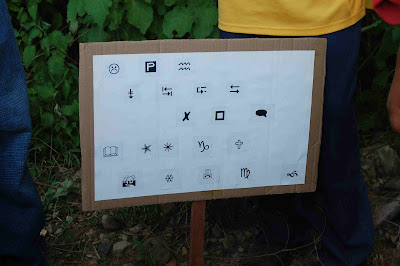 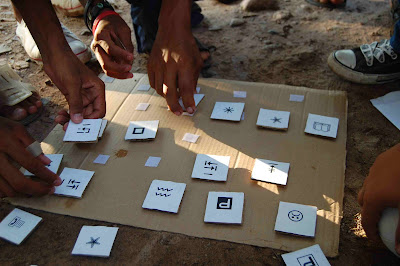 If they chose “Water”, they had to go down the hill to the edge of the river, memorize a number, cross the river, and write down the number on a piece of paper on the other side. The four teams to choose “Water” chose well and arrived at the final destination about a half an hour before the other two teams. 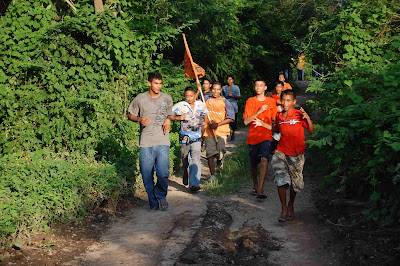 The Fearful, running down the hill. 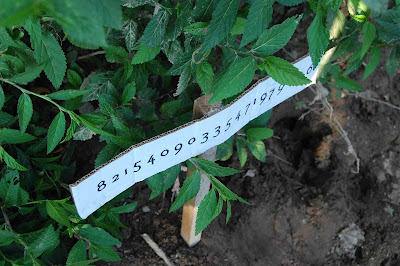 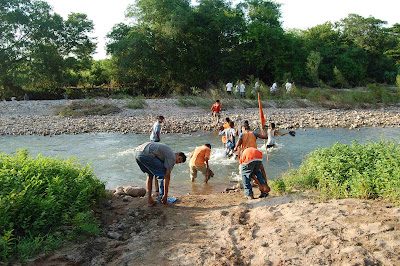 Now, to cross the river! 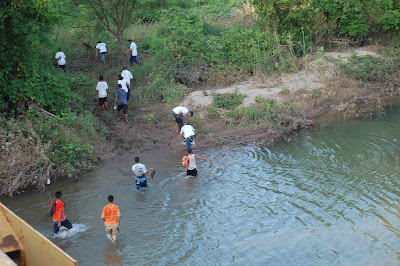 Arriving on the other side.
The final destination was the church in Arrayanes where we played a RETO classic called “Gladiators”. This was the third year we played this game and the first time we were actually able to figure out how to score it sensibly. Each team had the same amount of players run through the maze (a first) and the team throwing water balloons got one point for every time they hit someone (modified) and one point for every person of the other teams who did not make it through the maze (a first). It was a real good time! 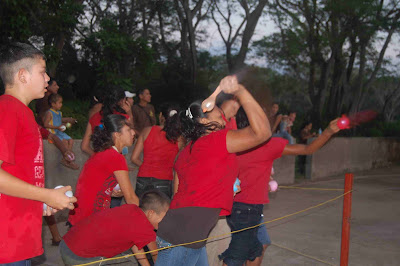 The Messengers throwing their balloons! 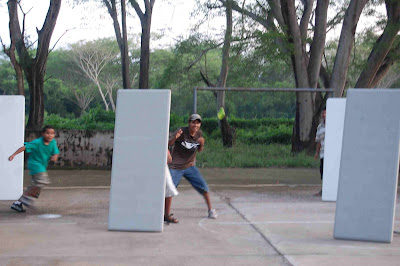 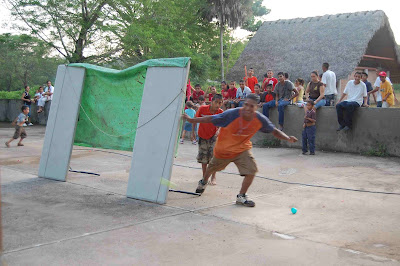 Fermin is about to reach the end. 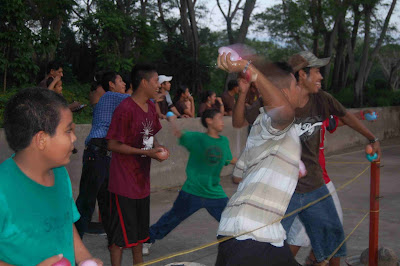 The Angels of Good ready to fire! 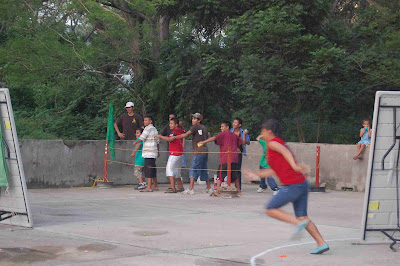 Cecilia sneaking her way to the next set of tables. 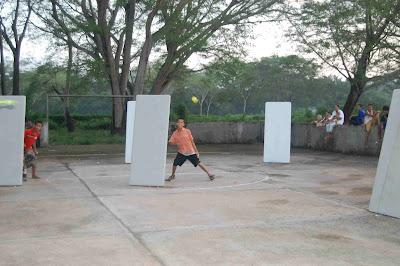 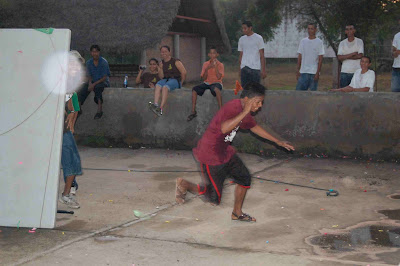 Angel racing to the finish!
When the game was over, we all went back to Cofradía for “The Valley of Decision”. 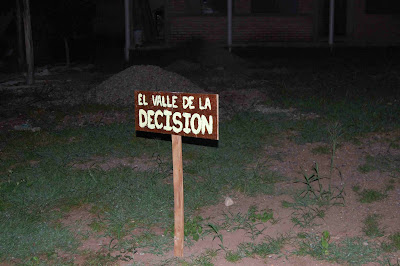 "The Valley of Decision"
This week instead of asking a series of questions, each team had to vote for another team to do chores. This is just like Tribal Council in the program Survivor. Each team, one by one, had to go into a room where I was, write the name of a different team on a piece of paper, and quietly return to their formation outside. 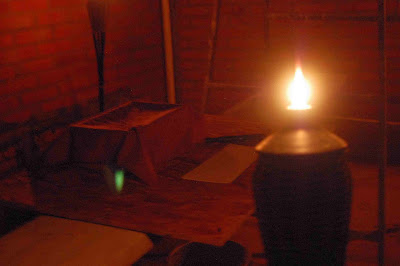 The vote box.
There was one team, The Messengers, who received immunity from the vote because they won Deal or No Deal. This was REALLY COOL!!! I did everything I could to try to keep a straight face. Once all the votes were cast, I walked out with the box, back to where I normally stand, and read the votes, one by one…just like on Survivor. The team that received the most votes was, conveniently named, “The Chosen”. 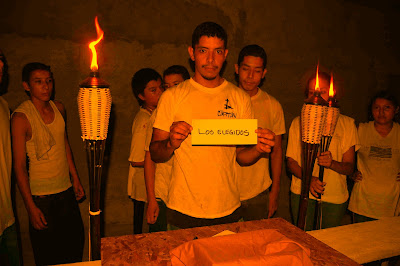 "The Eagles" showing their vote for "The Chosen" who were sent to do chores.
They also received the first two clues to where the treasure was hidden after they finished doing their chore which was to sweep the area where they played Gladiators and pick up all the garbage. 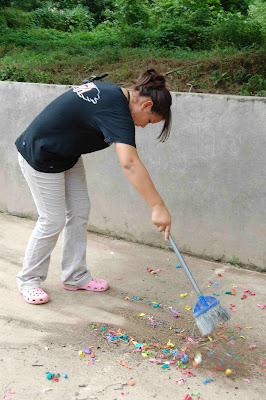 Gaby sweeping up the garbage. 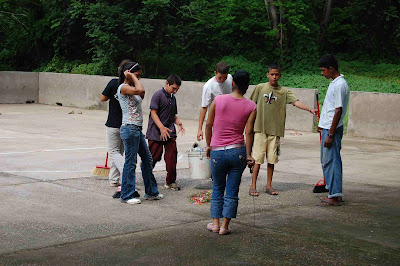 "The Chosen" working all together to finish up the job.
EL RETO UNCOVERED: Opportunities abound in EL RETO for personal growth. Many have faced many challenges already, including me. As I mentioned last week, I need to work on my delegation skills. I think I did a little better; however, sometimes working with people can be a little difficult (I can hear some of you say, “Duh”). One of the big things for me is trustworthiness. I need to be able to count on someone to do their job and be where they need to be when they need to be there. This flows into all 52 weeks of the year with this ministry. I believe that one of the motivating factors in being trustworthy is taking ownership. I absolutely love it when people take ownership of what they’re doing, this is something I saw this week and I really appreciated it.

On another note, one of our team captains had a huge struggle this week. At the very beginning of the event, only himself and two other people from his team showed up on time. All the others were working on their new flag (this was the team that needed to rename themselves). He told them to come, I told them to come. They did not listen. There was an incredible lack of respect for the team captain and he was brought to tears as the frustration level rose. So, he decided to go home and no longer participate in EL RETO. He was definitely facing a challenge of his own, one that I’ve lived through with the same people he’s dealing with. I talked with the team; they decided to stay together and hopefully some of them become aware of their individual selfishness. The theme is “Decide Your Destiny.” The captain decided his destiny with the individuals he chose to be on his team. The team decided their destiny when they chose a borderline blasphemous name, it was bound for destruction. I am convinced that God is orchestrating ALL of the events that go on during EL RETO, not just on the weekends, but during the week as well. I had the opportunity to talk individually with a number of the team members and for the most part they understood the consequences of their decisions. There are a couple of members that are semi-new to the youth group and I was a little concerned for them. Needless to say, deep down, they wanted to quit. I don’t blame them. As I shared with them some of the ways we can learn from this, they were encouraged to continue. Later on, I was able to talk to the team captain who decided that he was not going to participate anymore and tried to help him see the big picture. In reality, this is life. Life is a CHALLENGE. I shared with him some of my own experiences with similar situations and let him know that what he is living is real life and it will continue throughout his life. Right now would be a great opportunity to learn how to deal with these kinds of things. As God calls him into ministry as a leader, this will not be the first time he encounters “opposition”. I left him with something to think about: give up, or get up. He can give up and be overcome by the situation which has potential for learning nothing. Or, he could get up, dust himself off and face the Giant in his life. He listened to what I had to say and my prayer is that he will take it to heart and be able to learn some real life applications through this. He’s a real good kid!

By the way, the team’s new name is “Angeles Del Bien” Angels of Good.

What a tough week!
This event has been funded by generous people from the United States and Canada. If you would like to make a donation and invest in the "Cofradia Youth", please click here, THANK YOU!: https://www.egivingsystems.org/v3.0/index.php
Posted by The Silbermans at 7:39 PM