This was the biggest youth event we've had so far. We invited a church from Sinaloa to bring their youth. They showed up late Friday night in two small minivans after a 5 hour drive. There were 22 youth, 4 adults, and 4 children...IN TWO SMALL MINIVANS!

Saturday morning we started with games between 6 teams. This was the first time our youth were "leaders" of a team and they really enjoyed it. Each team played three different games against the other five teams; that's 15 games a piece! It took just under two hours and after they were done our youth invited the youth from Sinaloa into their homes to eat lunch. It was a great time of fun fellowship.

In the afternoon, we all got together again at the church for a service along with many youth who weren't able to make it to the games in the morning. The service went great! The excitement and enthusiasm of the youth added to the extraordinary time of worship we had in God's presence. It was pretty powerful. A 16 year old young lady from Sinaloa preached about Joshua and being strong and couragous to take over the land (or town) that God has given the youth. Very good message! We ended with a time of worship and a challenge to allow God to have more of our life than we have already given him. Wish everyone could have been there! 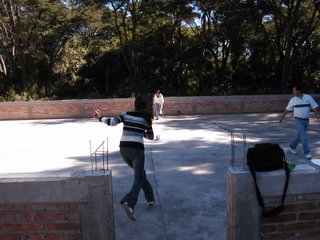 Broom Hockey turned foot hockey. One of the brooms busted, so they used their feet to kick a football into the opponent's goal. The referee would call out a number and if it was yours, you needed to run out, touch the edge of the goal and go kicking. It was a riot because as you know, a football doesn't roll straight. 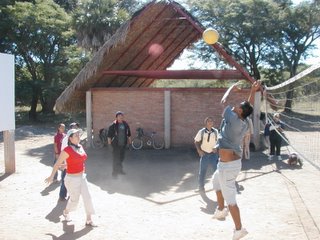 Random Volleyball was another game they played. The referee would take a piece of paper with a number on it out of a bag and whatever number that was, that's how many times you had to hit the ball before passing it over the net. This was pretty interesting and got everyone involved. 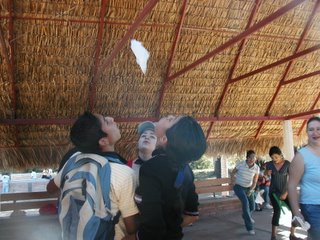 Kleenex Race was probably the funniest and funnest. Each team formed a line and they had to pass the Kleenex in the air without using their hands from one side of the room to the next. Lots of laughs. 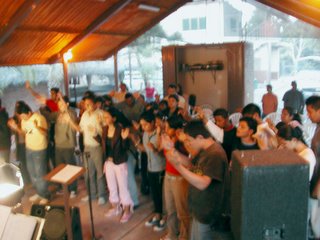 Not a good quality picture, but a good picture of what worship was like in the afternoon. Just about everyone was really into blessing God. It was very encouraging to see some youth who haven't expressed themselves in worship in a while do so that afternoon. What a wonderful time and what a blessing! 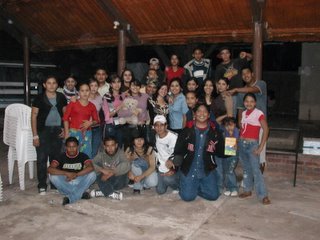 Just before the Sinaloa team was to leave, many gathered together for a group picture. This will be one of the most memorable evenings for everyone for a long time.
Posted by The Silbermans at 7:56 AM