Six shots left with the camera rolling and the soundtrack of The Passion of Christ in the background; everyone was quiet, everyone was waiting in anticipation…A MISS! WOW! Five shots left…another miss! FOUR shots left…a miss! THREE shots left…now, all they need is to find one square belonging to The Chosen; if they hit their own square, they’ll have to find two more of The Chosen’s with only two shots left! With three shots left…a miss! TWO SHOTS LEFT and the score is: The Chosen, 8; The Overcomers, 7. They only need to find ONE square! Two shots left…OOOOOPPPPPSSSS!!! THEY HIT ONE OF THEIR OWN SQUARES!!!! The score now is: The Chosen, 9; The Overcomers 7. ONE SHOT LEFT! You do the math. Yep! With that mistake, THE CHOSEN WON!!!!!!! This was wilder than wild! The students from The Chosen were going crazy that they had won EL RETO! The students from The Overcomers sat in disbelief. They had dominated all month long in EVERYTHING. The margin between them and 2nd place was incredible in the final tally. But, because they found the hidden treasure, The Chosen were given an opportunity to challenge them in ONE FINAL CHALLENGE. 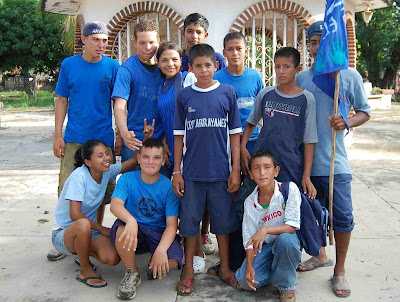 Words cannot express the excitement and the feeling of fulfillment as EL RETO 2008 comes to an end. We will live out its wake in the coming weeks as we talk at youth group about things we learned and as we hang out with each other during the week. The two words that would best sum it all up would be…TEACHABLE MOMENTS. There is SO MUCH to get out of this whole event that lasted all the month of September, especially when we look at it through the lense of “What can I learn from this?” Knowing that the Lord is the one who ordains all the events for us to be able to know HIM more and GROW in our spiritual journey with HIM gives us confidence and trust in HIM throughout our day-to-day life. DECIDE YOUR DESTINY was the theme this year and is what each of the 72 students encountered one time or another in EL RETO. From the beginning when each team chose a name for their team from a Bible story, to the end when The Overcomers made a mistake by choosing one of their own squares in EL RETO FINAL giving the victory to The Chosen.

The Overcomers dominated all month; they deserved to win EL RETO because they did a great job. However, through the hidden treasure that came in to play, the Lord set up a teachable moment to bring glory to Him. Life sometimes isn’t fair; that’s usually when we are challenged to put our faith and trust in Him. He is in control. This is just one of the lessons that the students learned this year during EL RETO. You can read in more detail by clicking on "El RETO Week 1", etc at the right.

MORE MINISTRY NEWS
Our Student Leaders are doing great. They have been extremely helpful in our weekly meetings taking on responsibilities with willingness and confidence. One of the former student leaders is struggling with many different things in his life and could use some prayer, please pray for Jose and his home life. Another student leader, Jesus, went to Bible school at the end of August and is doing awesome! He and a couple of friends he made started a youth group at the church they are attending. WOW! I am so proud of him! Another former student leader, Jose Luis, is living in Mazatlan, working with Youth With A Mission (YWAM) and a Homes of Hope project. He is doing really well also! If you would like to receive his emails, let me know, they are pretty interesting and are distributed in English!

We had our last short-term mission team in July and they finished painting all of the rafters of the new church. We would love to have you bring a group down and join us as we continue the construction of the building and reaching out to the community. We are excited about its progress!

After a long year of off and on homeschooling, we finally finished Rebecka’s Kindergarten homeschool class the 2nd week of October! We gave her a week’s vacation and then start first grade on October 20. Hopefully, we’ll be done by the end of July. She is doing so well in school and we’re very proud of her. This year, we are going to have her focus on homeschool instead of participate in the local public school so she can get a good grasp of how to read and write in English. Then, next year we hope to put her back in to learn the easier Spanish language.

Emma Rose is doing great. She has been growing a lot and her personality is very cute; her words are getting clearer and clearer each day. 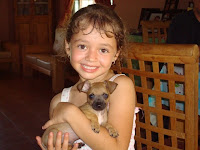 We also were given a pet in August, his name is Pony Deer. He is a “deer head” Chihuahua. He is a lot of fun!

†MANNA†
“There are two types of people who will never live up to their potential in Christ: those who can’t do what they are told to do and those who won’t do anything unless they are told.” An excerpt from a Daily Devotional by Neil Anderson
PLANS FOR MEXICO?
So, are you making any plans to be in Mexico? Let us know if you will be in or near Mazatlan, Puerto Vallarta, or Guadalajara. All three locations are within 4 hours of us; Mazatlan being the closest (3 hours). We would love to have you out for a night (or few) at our home and show you around Cofradía and the surrounding towns. Come see what it’s like and get a taste of what the REAL Mexico culture is like; a few of you have already done this and we would love to open the doors for others to do the same. If you have an RV, we have a hook-up on our property! Email us or post a comment and I will get back to you. We’ll see you here!

SUPPORT
Click here for options on how to invest financially in this ministry.

GRACIAS!
Thank you so much for your prayers and support. We would love to hear from you! If you have internet access and would like to receive this letter by email, let us know! We love you and pray for you often!

May the Lord bless you all,