EL RETO 2011 - WEEK FOUR
TO BE CONTINUED...
Ninety-two students have participated in this year's event so far.  Right away, the students hopped in the vehicles to get started with all the action in Las Pilas, a town about 3 miles west.  EL RETO goes from town to town in an attempt to attract attention and draw in not just students, but adults as well.  As we are reaching out to the students involved, the people watching get interested and start asking questions.  What an opportunity!
After taking roll call, the teams' first challenge was to toss as many small sandbags into buckets as possible.  Each bucket had a different value; the more points the farther away. 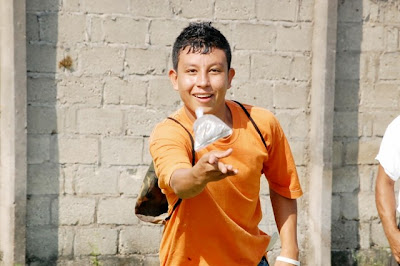 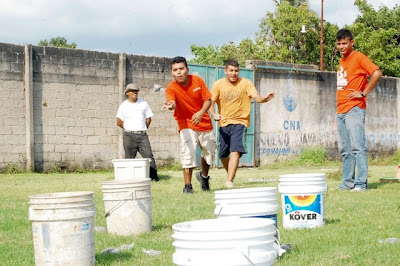 RESULTS:
After finishing in Las Pilas, the teams travelled another two miles to the town of Paso Real del Bejuco.  There, the teams played a basketball/footbal style game as they tried to get as many balloons in guarded buckets as possible. 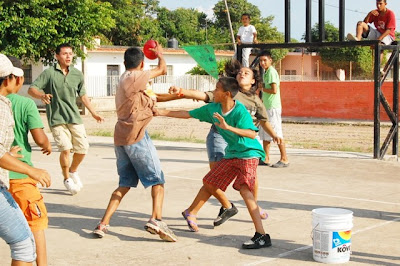 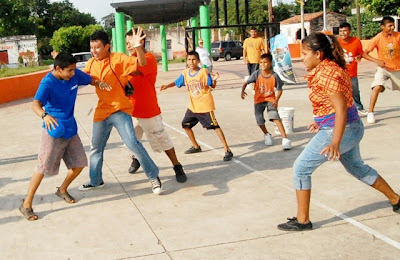 RESULTS:
From there, everyone got back into the trucks and headed back to Cofradía for the much awaited annual RETO Banquet Fear Factor style.  This has proven to be one of the biggest events that everyone looks forward to every year!  This year, with Martín Garzon's homecoming, we asked him to prepare some of the food that he experienced during his time in Oaxaca (not that the food is bad, just different).  Also, some of the staff prepared some other dishes as well along with the classics that the students always expect: Cow Eyes and Jalapeño Peppers.
Here is the menu: 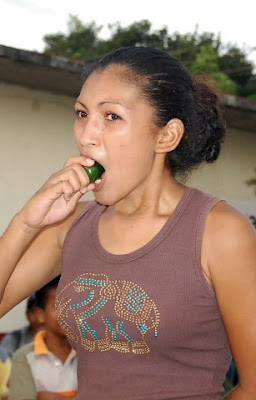 The Banquet is always an incredible time with lots of energy.  It is probably the most desired event by the students.
RESULTS:
After the Banquet, we continued with Part Two.  This was going to be a very unique Part Two since the Lord showed us how we could incorporate a very important lesson about real life, "Things Done in Secret."
Each year we have what in English would be called "The War of Coins."  Each Mexican peso coin has a point value. The greater the coin; the greater the point value.  The ten-peso coin is worth a negative 250 points.  Each team has the opportunity to deposit coins each week in their bottle as well as deposit ten-peso coins in other teams' bottles.  This is why it's called a War.  This year, the students have not waged any war for fear that they'll be seen.  So, we set it up for them to be able to wage war in secret while they had their voting time.  After each team had waged war, I removed the coins so that the other teams would not notice what had happened as they came in to vote.  The end result was that 5 of the 6 teams waged war.
After the voting and the Coin War, I shared about how hurtful things can be to others, ourselves, and God, when we do things in secret that do not glorify God.  Not only are those things hurtful, but also the Bible says, in real life, that those things that are done in secret will come to light.
At this point, I asked the students if they could put themselves in the place of being victimized.  Then, for those who were responsible for the actions, I asked if they would like to come forward to the microphone to ask for forgiveness for what they did against the other teams.  It was an amazing time!  EL RETO is just a game, but we were able to create a teachable moment that had a huge impact on the lives of not only the students, but the adults as well who were watching.  Four of the five teams came forward to ask for forgiveness, and each one was forgiven.  The negative points were nullified and the slates were wiped clean.
TO BE CONTINUED...
Posted by The Silbermans at 11:29 AM