"TO BE CONTINUED..."
Eight more new students showed up as we started our third week of events.  This week we started in Arrayanes with the students painting their faces in order to get ready for one of our classic activities called "Gladiators."
In Gladiators, each team is given the opportunity to throw water-balloons at the other teams as they run through the course.  The team running can hide behind block-aids, but they have to make it to the goal in less than a minute. 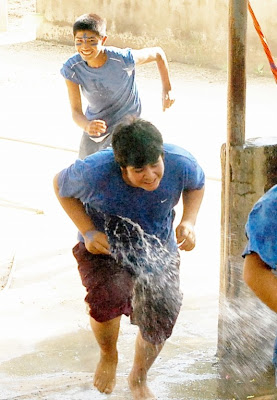 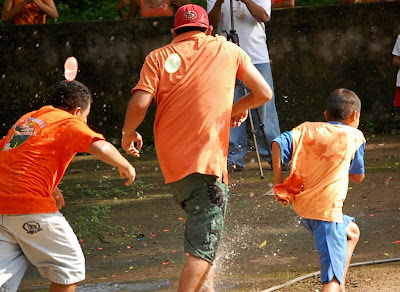 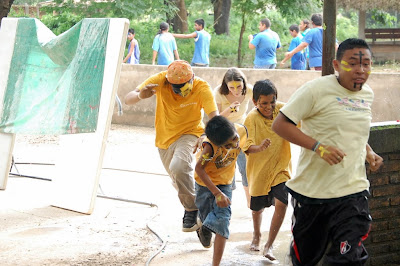 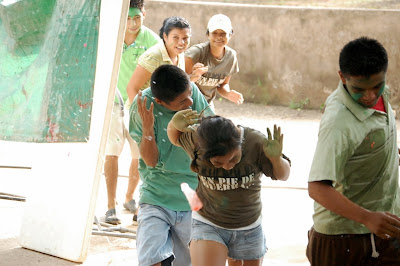 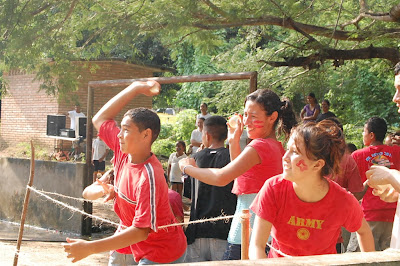 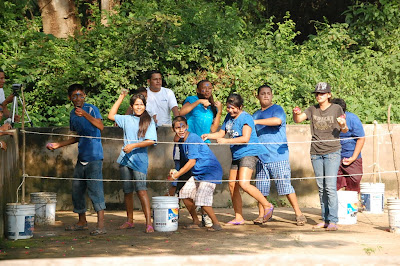 Each team made it through successfully within the time limit.  Most teams were hit numerous times with water-balloons, but there was one team The Servants of the Lord who impressed us all with making it through twice without even getting hit once.  They were the team to win the activity; they also hit the most individuals of the other teams when it was there turn to throw.
RESULTS:
From Arrayanes we began another race, but this time in the vehicles with their drivers.  Each team started in accordance with the points they had with the last place leaving first.  The Humble used the Medallion of Power in this activity to give them a 5-minute advantage over the next team to leave.
As they broke the code to where they were supposed to go, they ran to the basketball court where the drivers were waiting.  Once they got to the Arrayanes Bridge, they had to decide weather or not they wanted to "pay" to go across or just run through the river below and not pay.  Every team chose to run through the river!
After the bridge, they made it to the entrance of Cofradía where they had to draw a bottle with a message in it.  Whatever the message said is the route they had to take.  There were three messages:  "Life," "Death," and "To Be Continued...".
Life: In "Life," the teams had to make their way to the center of town and memorize a verse from the Bible, recite it to the staff that was waiting for them, make their way to the store that sold gas, buy 2 gallons of gas (money was provided), and continue on to the town of Las Pilas.  The Servants of the Lord and The Heirs both had to take this route.
Death: In "Death," they had to make their way around the outskirts of Cofradía and once they reached the soccer field in San Marcos, they had to run around the field two times, then continue to circle Cofradía, stop at the same gas store, buy 2 gallons, and continue on to the town of Las Pilas.  The Humble, The Prudent, and The Chosen had to take this route.
To Be Continued: In "To Be Continued," all they had to do was drive right through Cofradía without stopping and make their way to the town of Las Pilas.  The Faithful drew this one.
TEACHABLE MOMENT:
Sometimes, life throws curve balls at us and certain things that happen outside of our control can be either really great and easy ("To Be Continued"),  or normal ("Life"), or even sometimes it can be something very difficult ("Death").  Even though things come our way, we can still trust in the Lord for his strength and give him thanks for the blessings he gives us.
As they left Cofradía, they made it to the main bridge to town and again all the teams decided to run through the river.
Their next stop was Las Pilas.  The week before I had told them to study Matthew 5:1-12, The Beatitudes.  So this week, I put together a quiz for them to fill out.  Each team did pretty well; only one had some difficulty.
RESULTS:
In Las Pilas, we had one more activity for them to do.  Near the small lake, they had to fill a bucket full of water as a team.  While most of the team was holding halves of PVC pipe, three individuals were running down to the water's edge filling up smaller buckets and poured the water from the beginning of the line.  This ended up being a really exciting game!  Hardly anyone was dry at the end, even the staff got muddy from the splashes of the student's feet as they watched. 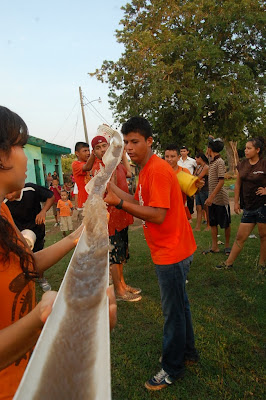 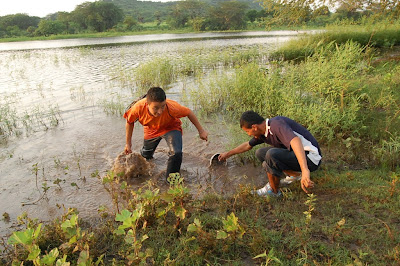 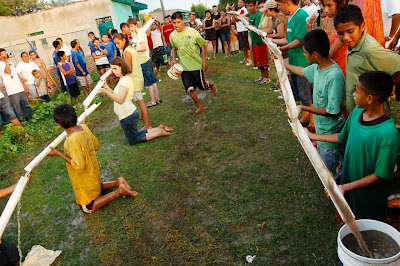 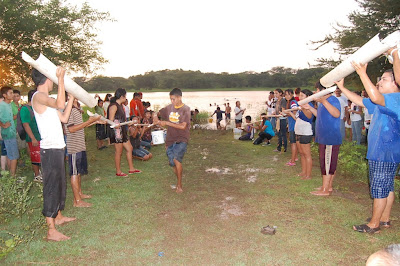 RESULTS:
Finally, we ended the evening in "Part Two" as we do every Saturday.  This week's teaching was what the Bible says about Hell.  Is it Real? Yes!,  Where is it?  The Bible doesn't say, and How do I avoid it?  Jesus!  Scriptures we used were, John 14:6 and 1 John 5: 11,12.  As well as many that describe what hell is like.
We also continued with "generosity" as we did a two-for-one for the encouragement points we call "Filipos" or "Philippis."  This idea comes from the book of Philippians, which is filled with encouragement.  The drawback to this was that we also did the same thing for the penalties; and there were lots!  Some teams lost 1,000 points or more!
The last item as usual was the voting time.  This week the teams voted for a team to have to do clean up.  The team that received the most votes was The Chosen, but they also were the only team to receive clues to the hidden treasures after they cleaned up the speed soccer court in Arrayanes. 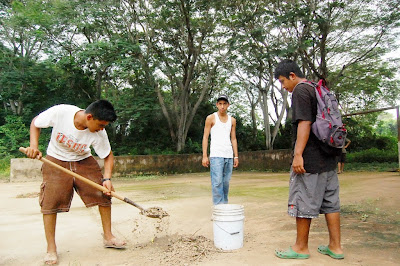 FINAL RESULTS AFTER WEEK THREE ACTIVITES:
TO BE CONTINUED...
Posted by The Silbermans at 6:09 PM