Three Stones Rolled Away at the Resurrection

The Rolling Stones...a cheesy, over-used, uncreative title for a Resurrection Day message. Yet, the name itself has a profound meaning once you meditate on the significance of the actual stone being rolled away from the tomb on the most important day of humanity. May I suggest that there were THREE stones that were rolled away that day? The stone that rolled away on Resurrection Day had a ripple effect on two other stones. I will not go into complete depth, but instead hope that we can touch the surface of each stone together in order to experience their texture: 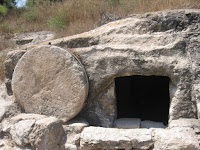 The Stone which lies inside each one of us. Finally, the last stone to be rolled away and removed is our Heart of Stone which we all have before God gives us new life. The Lord says in Ezekiel 36:25-28 "I will cleanse you" (v.25); "I will take away the stony heart out of your flesh, and I will give you an heart of flesh" (v.26); "I will put my spirit within you" (v.27); "ye shall dwell in the land...ye shall be my people, and I will be your God." He cleanses us, transforms us, fills us, and gives us residency. Our identity is completely changed.

That stone that covered death was removed and caused a ripple effect for the other two stones to be removed and allowed all of us the opportunity to cross the threshold from death to life.

I had the opportunity to preach this in Spanish a couple weeks after writing it...