Beto and I became friends when I was leading the youth group here 13 years ago. He and his wife Monica (who was also part of the youth group), have two daughters the same ages as our daughters. While on a family bike ride a couple weeks ago, we ran into Beto as he was driving cattle from one pasture to another. He offered to take me out horseback riding sometime so Tuesday I took him up on it. I haven't ridden a horse in a while, but I've always loved it! 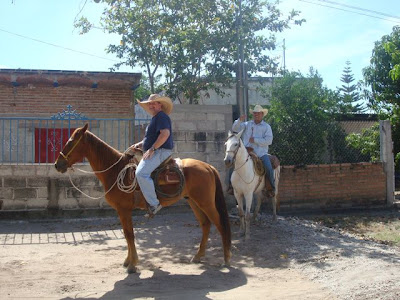 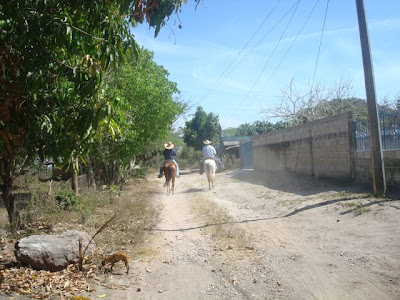 He took me out to where he had his cattle and we drove them from there to another place about a mile away (my first cattle drive!LOL). At one point, Beto had to run down the road to get some cattle who had veered off. Once my horse saw Beto running, it wanted to run as well. I was ok with that, but my hat flew off! As I tried to grab it, I lost control and pulled on the reins to stop the horse. Suddenly, he stopped and almost sent me to the ground. It was pretty funny. Too bad no one had a video camera for that one!
After we took the cattle to the other field, we rode around the large pond outside of town. I had never been on the other side before and it was beautiful. We stopped along the way to get some water out of a natural well and sat down to eat some green mangos with lime as we talked about life.
I would do it again in a heartbeat!
Posted by The Silbermans at 10:37 AM