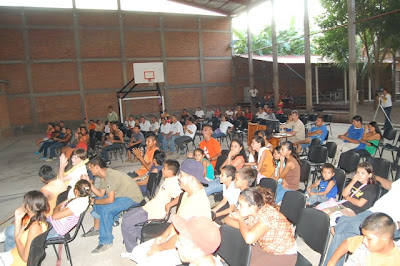 We had 94 participants this year in EL RETO.  This year had a different twist in terms of its seriousness with the messages.  The teachings we encountered were not light-hearted.  The main theme was that our existence continues; I believe that message got across.  Many of the students encountered other teachable moments such as asking for forgiveness and forgiving, humbling oneself, dealing with anger, recognizing that there are false doctrines that look like the truth, learning about the reality of heaven and hell, and the list goes on.

Saturday, October 1, we began with our students leading the worship.  Martin followed with a great Word as he encouraged the students to make a decision about who they will serve.  After Martin preached, Pastor Luis led a time of prayer with the students.  It was a great time.  Not all the students came forward, but many of them did, as they were hungry for a touch from God.

Finally, the staff as well as students gave testimonies of how their lives were changed and gave encouraging words to others.

Since many of the people present were visitors that had been invited, I gave a quick summary of events before we presented those who had found the hidden treasures and then carried out the raffle.
HIDDEN TREASURES
All three hidden treasures started with the same clue, but different dates.  The first clue stated that, "The treasure was in a piece of land that I used to own," then it gave the dates of birth and death of the person.  That means the students had to go to the graveyard to find those dates and work on figuring out what land they used to own.

Grace: Grace was hidden just outside of Arrayanes.  The Faithful found the treasure and it redeemed to them all the points they used in the RETO Auction: 9,300 points!

Justice: Justice was hidden just outside of Cofradía.  The Chosen found this treasure and it allowed them to add points to other teams.  For every two points they added, they would get 1 one point.  They could give up to 5,000 points.  They added 5,000 points to The Humble and in turn received 2,500 points for themselves.

Resurrection: Resurrection was hidden just outside of Santa Fe.  The Heirs found this treasure that gave them the opportunity to challenge the team that ended with the most points in one final challenge (EL RETO FINAL).  This was a free pass to the "Championship."

Once we finished with that, Max carried out the Raffle with Rebecka's help.  Two of the items have yet to be claimed, but Juan Luis and Pola of Arrayanes won the stereo.

Then, the moment that the students had been waiting for: the announcing of the points...

Congratulations to The Heirs who dominated all six weeks and by the skin of their teeth, won EL RETO 2011 with 23,808 points!

Posted by The Silbermans at 6:11 PM