This year we started EL RETO (The Challenge) with a Captains Retreat in order to help prepare them for the challenge that awaits them of leading a team.  We have three returning captains; Francisco Ruiz, Jorge Garcia, and Alfredo Garzón.  We also have three first time captains; Karolina Vazquez, Jazmin Galicia, and Andrés Diaz.
Instead of doing a one-day retreat out on the beach in San Blas like last year, we decided to do a three-day in-house retreat here on the Mission Base.  It went excellent!

The first day was filled with teachings on our relationship with God, motivation, dedication, confidence, how to lead a team, how to maintain unity in the team. 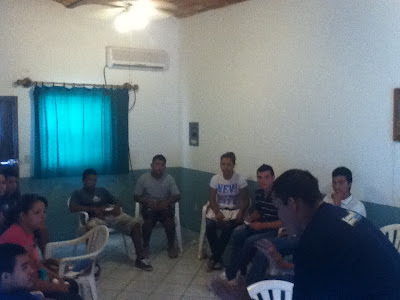 On that same day, we gave each of the captains a project to lead.  They randomly were picked to lead the other captains in a cleaning project on the base, at the church, or at the church property in Arrayanes.

The second and third days were set aside for less talk and more action as they carried out four projects the second day and two the third day.  The purpose of this was to give them experience in leading as well has helping us to observe how they lead and how well they pay attention to detail.  At the end of each project, we spoke with each captain and pointed out to them the positive things we saw as well as let them know some of the things that they could improve on.  It was a very successful time as we all got to know each other better.  Some mentioned that they wished it could have been longer.


Once all 6 projects were finished, everyone was very tired, but we had a couple of games for them to participate in as the choosing of the Bible story and color for their team in the event EL RETO...just two weeks away.

Martin organized a game in order for the captains to have an opportunity to choose first the story they would use for their team.  All six captains held a small pipe as they wound up string little by little to reach the center pole.  The first one there got to choose their story first. Once the captains chose their story, they moved on to the next game led by Mily that decided the color of their team.  They had to walk under a number of black water balloons.  Most of them were filled with water, but there were six that were filled with the six different colors for EL RETO.
AN EXCELLENT TIME!  Thank you so much to all of you who have donated and prayed for this event.  EL RETO is a time to reach new students, bring back ones who have strayed, and learn about anything the Lord would like to bring up.  EL RETO is FILLED with teachable moments and we try to take advantage of each one.  We are truly blessed with the students we have, the staff that help, those who help provide the means, and the warriors who pray! 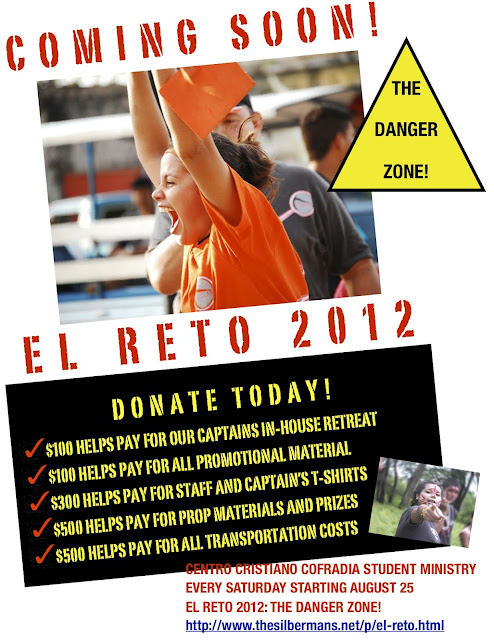 Posted by The Silbermans at 5:20 PM