Jesús Alberto Hernández and Cinthia Maribela Flores were married on February 17.  Jesús (Chuy) is Pastor Gollo's oldest son and was a strong leader in the Student Ministry when I was the Director of that ministry.  Cinthia grew up next door to the Mission and was often at the base; I have video of when she was 2 years old at a youth group meeting!

I'm proud of these two.  They are the first couple who has been involved in the Student Ministry and has gotten married without moving in together first.  There has been other Christian weddings, but this was the first one where both are from Cofradia.

Chuy is one of the four that make up my discipleship group that meets weekly.  He continues to grow and be sensitive to God's call on his life.  Cinthia will be participating in the Women's Bible Study that just started under Geña's direction. 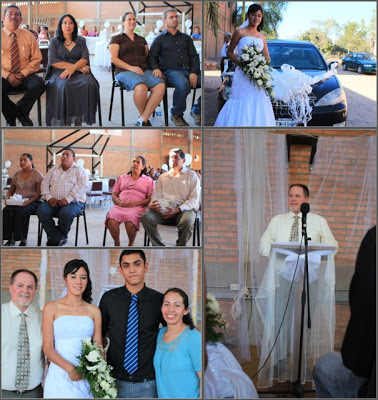