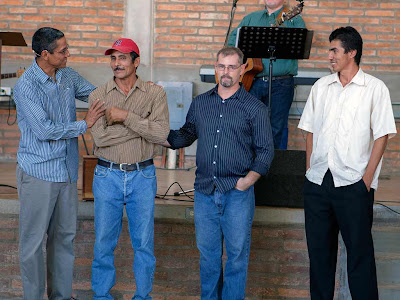 Pastor Gollo, Horacio, Jay, and Marin headed out Monday morning to Oaxaca where Martin spent some time serving while he was Bible School there.  They will be working with the children, youth, men, and pouring a floor for the children's ministry room.  Please pray for their trip as they are driving through the night a distance of more than 24 hours away.

UPDATE:  Tuesday the truck broke down and they will have to sleep in front of the mechanic's place in the truck and wait until Wednesday when the parts arrive to get if fixed.  The alternator failed and a fan belt broke.  They are in Pinotepa Nacional where the 5.8 earthquake was in the morning (no relation to the break down).

UPDATE (4/3): The men have returned from their trip and have some very good stories to tell of how God watched over them and used the travel mishaps for His Glory.  Many of the people (policemen, mechanics) who they talked and prayed with were needing someone to share with them.  Lives were touched through circumstances that we wouldn't expect (God seems to do stuff like that a lot!).

Gollo was pulled over in Acapulco amongst the chaotic traffic with malfunctioning stoplights.  He tried to "fit-in" with the rest of the drivers but didn't get away with it.  Twice he was pulled over and twice he was let go.  The second time ended with praying for one of the officials who was a Christian and in need of someone to pray with him.

The truck broke down about 1/2 mile before a town where the mechanic offered his bathroom to wash up, and a place to park the truck for them to sleep.  This mechanic is a prodigal son of a Baptist preacher.  The men were able to minister to him and pray with him before they left.  WOW.

Once the men arrived to their destination on Wednesday night, they held Men's meetings, children's meetings, poured floors for the Sunday School, visited jails, and spoke during the Sunday service.  Amazing testimonies of how God used these guys.  I've only talked with Pastor Gollo and Horacio, I haven't heard Jay's and Martin's stories yet.  Should be good.

Thank you for your prayers during their trip.
Posted by The Silbermans at 3:35 PM