This year's finale featured guest speaker youth specialist and author, Ernesto Ramirez, from Mexico City.  It was one of the top closures we've had for EL RETO.  He was very dynamic and spoke directly to them.  Many came forward for prayer as he challenged them to choose truth and be someone that makes a difference in this generation.

We enjoyed worship with Pedro Castellanos and his band from Tepic including the drummer, Hernán Mercado, who has visited us many times.

Last August, we brought four bikes to raffle off.  Many people were asking about buying them, so we decided to sell two and keep two for the raffle.  I also included a soccer ball.  We had lots of fun with that.

Pastor Goyo's son, Goyo, proceeded with revealing the hidden treasures and made it very suspenseful.  Three of the four were found and many teachable moments were created.  One that stood out was that no one looked for the fourth treasure because someone from one of the teams said he found it.  Of course, the lie worked and people chose to believe it.  Thus, our theme, "Choose Truth" comes in handy here.  How many times do we believe someone's testimony just because they say it's true?   Also, of the three remaining, each one who found a treasure had to choose an envelope.  On the outside was written, "You have chosen the truth" in the code language we used this year.  Apparently no one knew what it said, but as they chose an envelope, they were told to "choose truth."  Only one envelope contained the prize of being able to challenge the team who won by points in one last game to be named the winner of EL RETO 2018.  The other two envelopes taught us what it says in Proverbs 14:12, "There is a way that seems right to a man, but in the end, it leads to death."  We can strive all we want to be good people or join a certain religion and it all may seem "right".  However, we need to make sure that what we believe is TRUTH.  Otherwise, we will end up with an empty envelope in the end.

Angel, the captain of the red team, was the one who chose the "truth" envelope and won the opportunity to challenge the point leaders in the final challenge.

Karo and her team (green) beat out Jesica's team (blue) by a very narrow margin.

EL RETO FINAL was a series of questions by video in a similar format to Who Wants To Be A Millionaire.  In the end, the green team (The Decided Ones) held off their opponents, the red team (The Warriors), and became the champions of EL RETO 2018! 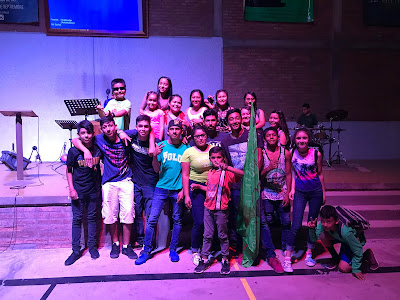 Thank you all for praying for us during this time of another successful season of EL RETO!  There are so many things that we can learn from in this event and the seed has been planted in the hearts of over 200 students!

ADMISSION IS FREE
BECAUSE OF PEOPLE LIKE YOU
WHO CONTRIBUTE TO THIS MINISTRY.
PLEASE CLICK HERE TO DONATE TO
EL RETO
Posted by The Silbermans at 12:48 PM