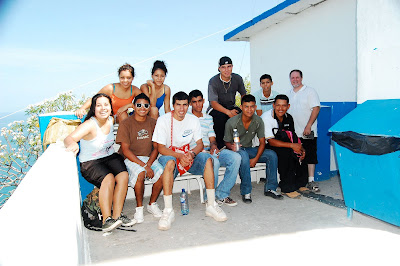 Dates: July 14-16
Amazing! This was our fourth year doing this retreat and I am completely convinced that this is so vitally important for our ministry--and others as well! We started off towards Mazatlán on Wednesday morning getting to know each other better in the van and I had some questions for them to think about as we prepared to review the last 12 months of youth ministry and plan for the future.
As we arrived at Hotel del Sol, we found that there was only one family there so it made for an excellent place to not only stay, but meet and accomplish what we needed to. The two nights we stayed there were pretty peaceful and the place felt like "ours." The atmosphere of this retreat speaks volumes as to how it will turn out.
After we got settled, we had an orientation then went to eat lunch at our favorite restaurant in Mazatlán--Pura Vida. Then, we headed back to the hotel and had a couple of sessions about our Identity as an Individual: The Need for a Leader to have an Encounter with God and The Need for a Leader to Make Forgiveness a Major Part of their Life. After this, we were ahead of schedule and I had a movie prepared to watch on Thursday night, but we decided to change plans and switch the movie night and Worship nights because Martin's message on Forgiveness lead right into what I wanted to teach from the movie Invictus (A movie about the 1995 Rugby World Cup in South Africa and the countries initial moves into being united after the apartheid). Tons of Leadership learning moments in the movie! 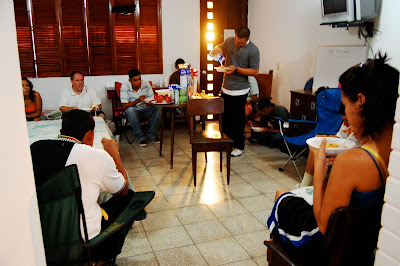 Breakfast: Chuy and Martin were awesome at taking on the food responsibilities. I was really impressed with their servants heart!
Thursday, we had breakfast and headed up the hill to the highest functioning lighthouse in the world (no joke). The sun was hot and it was a tough climb (especially because I hurt my knee again that morning as I slipped in the shower--the swelling is just now starting to go down after a week). At the lighthouse, Luis shared about how God is our lighthouse who guides us to where we need to be--great stuff! 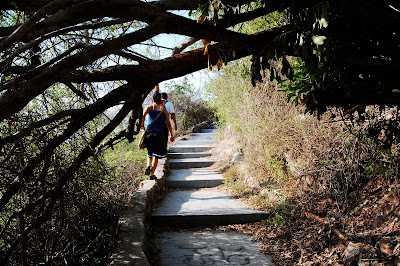 The hike up the hill.
Back at the hotel that afternoon, we did some team building exercises and we spent a number of hours talking about our Identity as a Team Member and then focusing on reviewing the past year and looking towards the future. It was a lot of fun and the worship at the end seemed to seal our unity together. 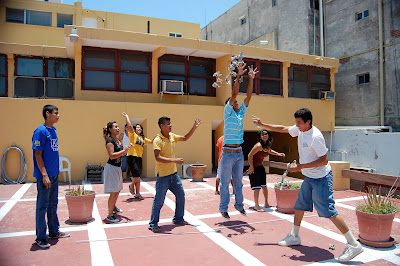 "Me Against the World" helps students get a feel for the need to be on a team. You can run a ministry by yourself. 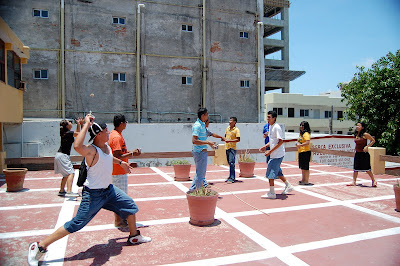 After a number of students had the opportunity to go against "the world," we divided them into two teams--much better! 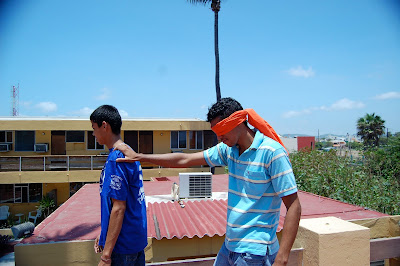 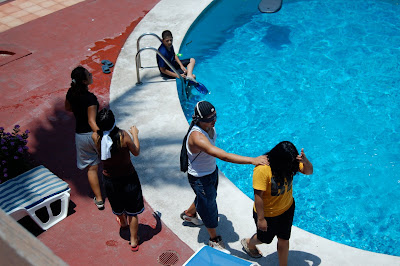 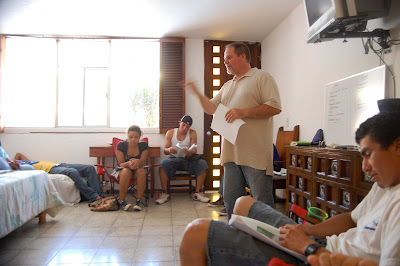 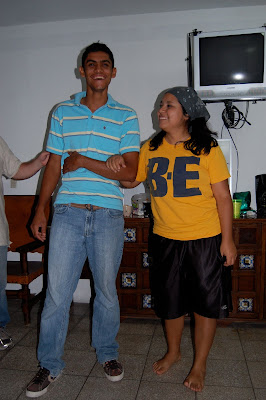 Chuy and Sandy volunteered to unknowingly represent a couple as I talked about Guy/Girl relationships.
Friday morning, we focused on our Identity as Servants and the need to focus on "them" instead of "us" when we serve. God knows our motives! Each year we give the team a project; in years past it's been a day retreat with the new students who are entering into Jr. High as a welcoming. This year, so far there is one student who comes to church regularly who will be entering the youth group. So, I decided to have them select an activity that they would like to see happen in the next months and plan it without Luis' or my help. They did a great job working together and are planning on a Rap/Rock concert plus movie night for August 21st. They are really excited and so am I to see them doing this!
It's always strenuous to meet for so long together, people get tired. Each year, we've ended the retreat with a special trip to Mazagua (a big water park). 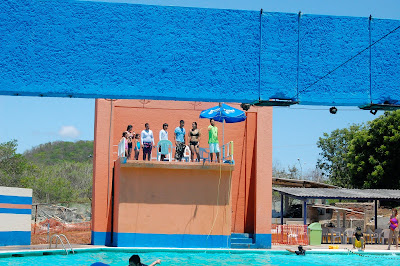 Thank you so much for all of you who prayed as well as those who responded to the petition of support for funding this event. We received all we needed and continue to raise support for the upcoming EL RETO starting at the end of August.
If you would like to participate by making a donation to this ministry, click here to see how.
Posted by The Silbermans at 11:03 AM