SEE EL RETO 2010 WEEK ONE HERE.
SEE EL RETO 2010 WEEK TWO HERE.
We had 11 more students arrive for week three making the new record total 98! This year has been very interesting as it includes pretty intense competition.
Last week we left off in Arrayanes after the Gladiator game. So, this week we started in Arrayanes. They were off to another race making fire and searching for 12 foamy chips located in homes and remote places in Arrayanes and Cofradía, asking the homeowners or staff for "Chip Please". Finally, they had to capture a loose chicken and take it to it's owner where in exchange they were given their menu for the famous EL RETO Banquet!
In order to get the map and instructions for searching for the foamy chips, they needed to start a fire scraping magnesium and striking the flint to get sparks. Once the fire started, the flame needed to reach a string attached to a bucket which contained the information they needed. Once the fire burned through the string, the bucket fell and they were off...
There were 6 locations in Arrayanes, 2 along side the road between Arrayanes and Cofradía, and 4 more locations in Cofradía where they had to find chips. When they were done with searching for chips, they had to catch a chicken. The clue said "Guess what! Hugo and Norma's chickens got loose and they are at the church praising God, but it's time for them to go home. Find the chicken with the tag of the color of your team tied to it's foot. Then, your driver will take you to it's home."
When they captured the chicken, they took it to Norma at her house and in exchange, she gave them a menu of the RETO BANQUET!!
The first team to arrive at the Banquet were The Detectives, followed by The Disciples and In Love. All three teams showed up at about the same time.
This year we had 10 items for the banquet and an eleventh one for all participants...
1. "Rebecka's Specialty" This year we let Rebecka choose an item and she chose dog food!
2. "Lemonade" Lemonade with a lot of garlic and salt.
3. "Big Foot" Baby octopus--between two people.
4. "Waterlogged Nemos" A live fish from the river.
5. "RETO Special #1" Chile Jalapeño.
6. "Surprise #1" Tacos--real tacos from Pilas (for those of you who have experienced them!!).
7. "Chocolate Milkshake" (Chocolate Milkshake with onion).
8. "RETO Special #2" Cow Eyeball.
9. "Curd" A 5 inch long piece of greasy cow intestine.
10. "Surprise #2" Raw egg with straw and coke.
11. "Dessert" For the whole team to enjoy...a three liter bottle of coke!
Here's the video...
After the banquet, everyone returned to Cofradía to have their small group time outside the church while we prepared for "Under The Scope."
This week we focused on how dedication to your team will help you win. The banquet was incredibly gross, but most didn't give up and continued to fight for their team. Sometimes, we need to fight for our team of brothers and sisters in Christ. We need to cheer them on as they cheer us on as well! Some may have to experience a situation a little more "gross" than others, but we should be united in helping each other. We should show love and respect towards each other just as we should to our captains, the staff, our pastors and leaders, even our parents. Conflict is resolvable if we are willing to humble ourselves and admit when we're wrong. The biggest problem is when both parties think they're right--most of the time, their "rightness" is made on assumptions and misinterpretations...unfortunately.
We had a really good talk and the evening ended on a very positive note! I was happy to hear later that there were parents outside waiting and got to hear what we were teaching.
Rebecka accompanied me while the teams came in to vote. 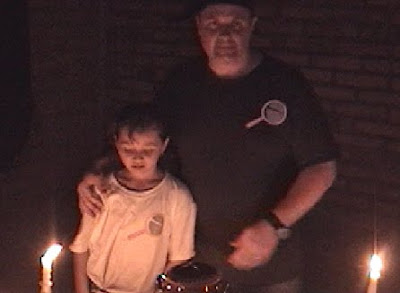 Then, when they were all done voting, Rebecka carried the clay pot to where we were to read the votes.
The two teams that tied for most votes were... 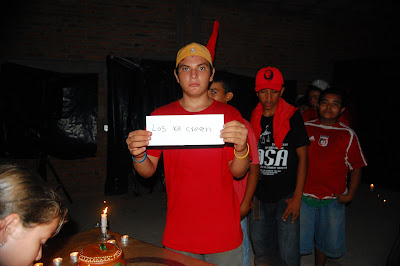 Those Who Believe whom The Explorers voted for... 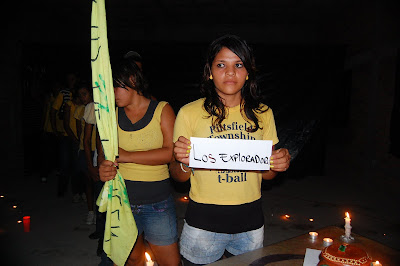 and The Explorers, who Those Who Believe voted for.
Each time a team gets voted for, they get to choose between "Christ, Gold, or Silver." Those are the names of the three hidden treasures. Depending on which one they ask for, is what clue they get. If they get chosen twice, they get to have two of the three. If they win most votes, they get all three plus a video of me talking about treasures...ones the people have found around here from years ago, ones that are mentioned in the Bible, ones that we've hidden in the past, and the ones that are hidden this year. I give them a better clue of each one...but subtitled in the chinese font and chinese gibberish. If they get most votes a second week, they'll get a map to help them determine where to look using the compass. Right now there are three teams who have won most votes two times and one other team that has won once.
Posted by The Silbermans at 1:12 PM