Once again the night started with a short game for the teams, which allowed Staff to set up four activities at the nearby soccer field. The game included twenty team members being pulled individually for about fifteen feet on the church floor while sitting on a bucket lid in a race to the finish line.  Once all twenty members from each team finished, the teams headed to the field where they took turns participating in various races and a human bowling challenge.

For the bowling challenge, team members were first primed for the lane with a cold bucket of water dumped on them.  Plastic tarps for lanes were already ‘waxed’ with soap and water.  The bowling pins were empty water jugs.  Some team members got a long running start and were hitting strikes all day long.  Others were ‘gutter balls’ making it halfway down the lane before falling to a stop and hitting zero pins. 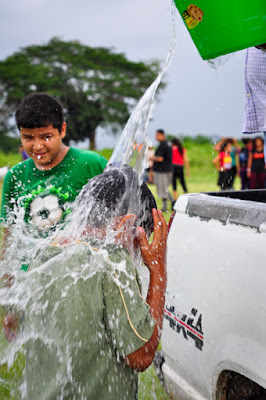 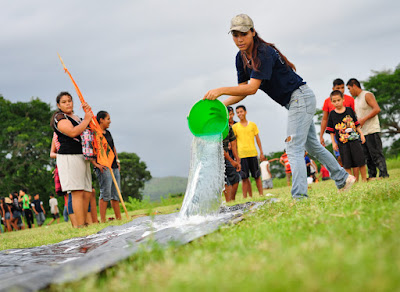 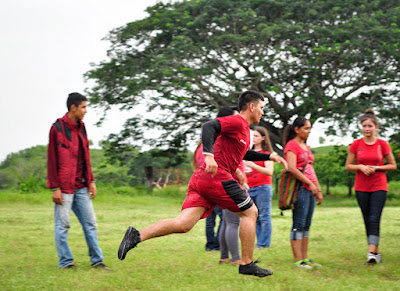 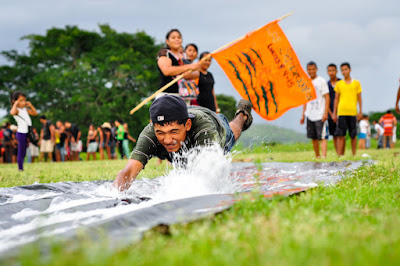 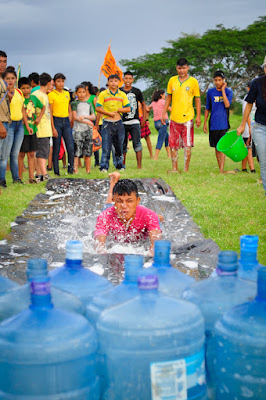 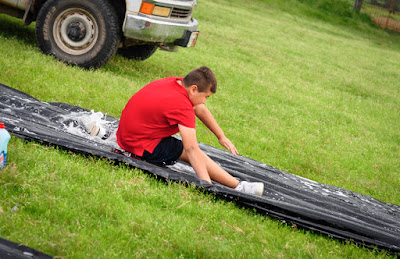 This reminds us that often we fall off course, and through those experiences can become un-fruitful. By the grace of God, however, it’s never too late to jump back on course.

In another game the teams first worked together to build a web from rope to help carry a member down the field to pick up puzzle pieces three at a time. 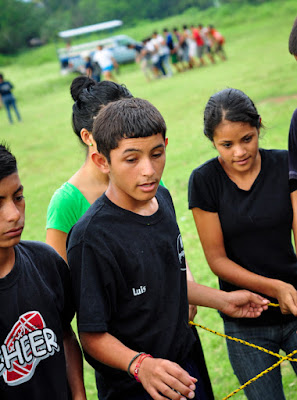 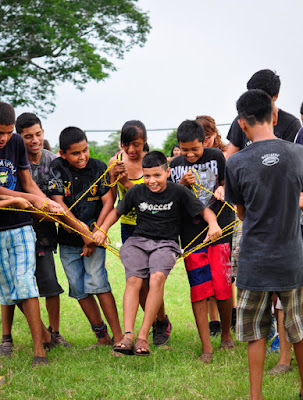 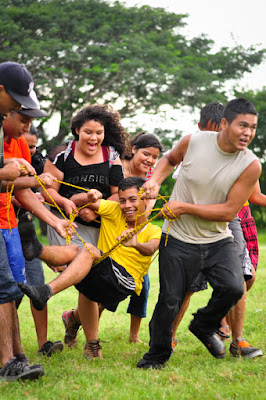 The rest of the team waited, and once all the pieces were carried back, they worked together to complete the puzzle.  The teams were given 5 minutes to finish and received points for correctly completing the puzzle. 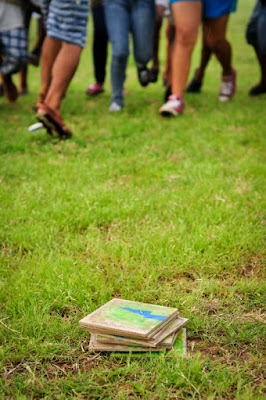 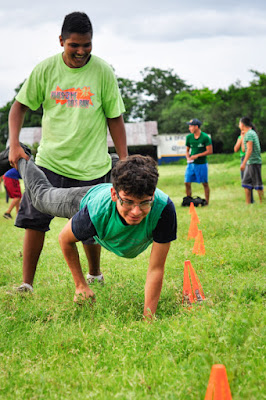 For the second race multiple team members stood on wooden planks, one for each foot, and had to cross the field walking as one. 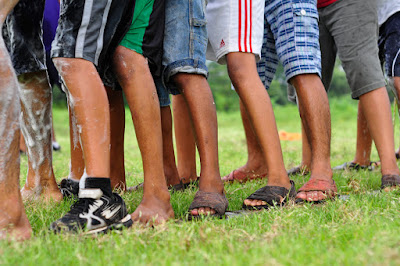 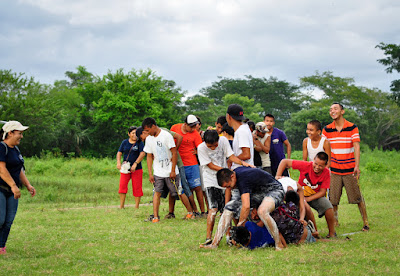 This proved difficult for the teams and highlighted the importance of unity and communication.

After the field games, teams ran down the street where a truck pull challenge was waiting for them.  Each team worked together to move a truck uphill to the finish line. 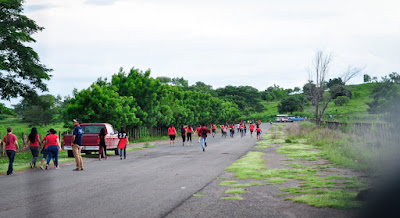 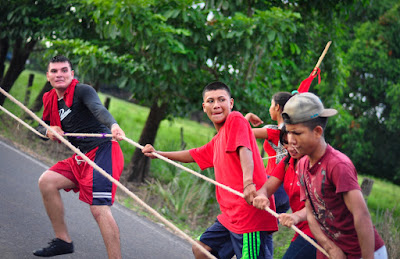 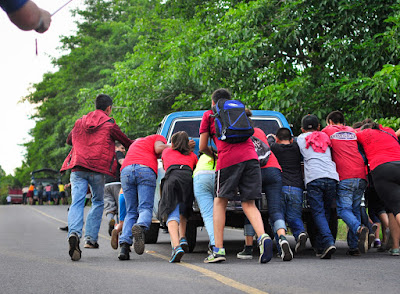 As we watched, the scripture that came to mind was Philippians 4:13 which states, “I can do all things through him who strengthens me.”

Once the teams reached the finish line, they were rewarded with rest and a ride to Sante Fe for the auction. 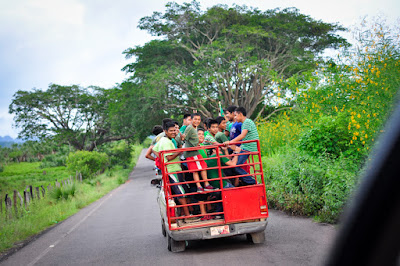 Teams used their accumulated points to bid on unknown items such as cake, soda, a movie night, clues for the hidden treasures as well as one very interesting prize. 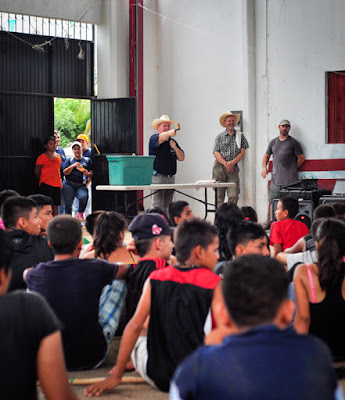 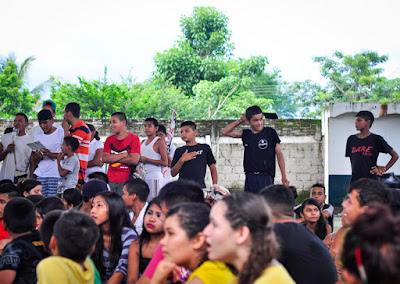 Usually the last prize of the night is saved for something really special.  Almost all teams jumped in causing a bidding war and driving the price/points way up.  Captain Lalo and the orange team made the final bid.  To everyone’s surprise, they had been bidding on the un-wanted responsibility for doing the nightly chores.  He was also given a consolation prize, which added to the embarrassment of bidding on the chores.  The consolation prize?  Pastor Luis’s dog Minnie.  This was a highly pivotal moment in the night as some were elated and relieved, while others were disappointed, even angry.  The situation spoke to a number of people that compared to what Lalo had just gone through, Jesus went through so much more for us.  Lalo was a very good sport and understood the principal of this teachable moment.

The teams packed up and headed back to the church in Cofradia for worship and the Refuge.  Since  the chores were already determined through the auction, teams voted for another team to receive points gifted to them instead.  Two teams received the most votes and the points offered were divvied between them.

Here is a video recap of week four:


You can be part of this great event by making a special donation to EL RETO online here.  Your gifts provide the resources, preparation, promotion, transportation, prizes, and the opportunity for the young people to come to this event.  NOT ONE of the students is charged any kind of admission fee because we want them to come.  We thank you in advance for participating with us!

Posted by The Silbermans at 4:56 PM