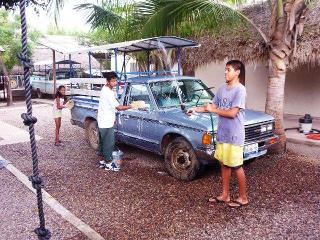 "Las Ballenas" (The Whales). Taken from the story of Jonah and the whale. They lost the first Reto Final in Cofradia. 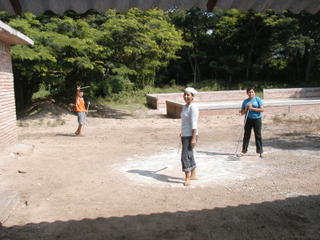 "Los Desobedientes" (The Disobedient Ones). Taken from the story of Jonah and the whale. They lost the first Reto Final in Arrayanes.

We started a game last week with the youth Sunday School. We're calling it El Reto (The Challenge). There are two teams in each town (Cofradia and Arrayanes). The towns do not compete against each other so there will be two winning teams. They had to name their team after a Bible Story. Interestingly enough, the two teams that lost the Final Challenge on Sunday had chosen the same Bible Story. They are having a lot of fun. It will last five weeks and this Sunday will be week #2. One of the purposes is to bring a bit of change to the normal time of just bible study and bring back some youth who are no longer involved. They are getting points for a number of different things such as attendance, bringing Bibles, bringing friends, and there is a fundraiser involved (penny wars). We also have a devotional and a quiz the next week, a main game, and at the end of the class there is El Reto Final. They cannot win points in this, but the losing team has to do some kind of work on the church property. This past week, one team had to wash one of the ministry vehicles, the team in Arrayanes had to clean a piece of the yard with machetes. They lose points for not coming. They really enjoyed themselves last weekend and are looking forward to this Sunday. I am looking forward to it as well.
Posted by The Silbermans at 6:45 PM