Pastors from four other churches in this region have been bringing their youth to join us in EL RETO this year.  This is something we've always been open to and see it as a great way to collaborate with others as we work together to increase the Kingdom of God.  There were 15 more students bringing the total to a RETO record of 106 participants! 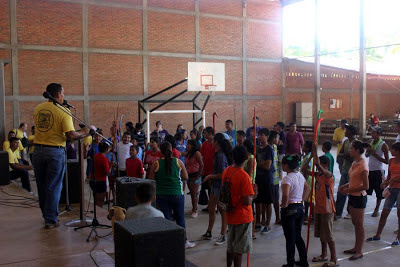 A member of our church from Ruiz is a Jr. High P.E. teacher and he absolutely loves the activities in EL RETO.  He offered to help us this week as he put together our initial game we called, "Hoopball Chaos".  It is similar to basketball, but one member of the team stands inside a hula-hoop as the other members throw him a basketball to catch.  It's a game for two teams, however we decided to do all six teams at once.  Imagine how to do this in an area the size of a school gym. 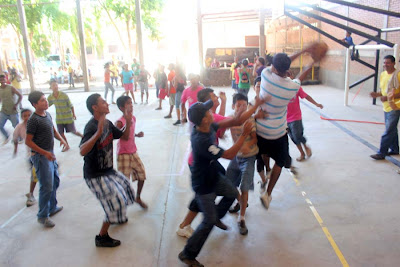 From there, each team started on a labyrinth trail through the five surrounding towns.  After making fire with flint, they chose between going to Santa Fe or Arrayanes.  Each location had a game or a task to accomplish. 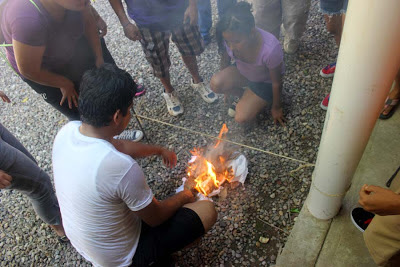 Once they finished, they could choose between either Santa Fe or Arrayanes (whichever one they didn't go to), Las Pilas, or Paso Real.  If they chose Las Pilas, they were to swim out to get a balloon which had their next clue.  If they chose Paso Real, our P.E. Teacher had a number of activities for them as the entire team passed through a hula-hoop, rolled over one another, skipped rope, and wrote a scripture verse from memory on the cement basketball court.  Once they finished, they could choose any town they had not been to before.
Two catches were in Paso Real; the first team to arrive detained or "yeilded" any team they wanted to for five minutes.  That team had to wait once they arrived in order to start the Paso Real activities.  Also, only in Paso Real was there an option to go to Cofradía.  If the team chose Cofradía, they came out of the labyrinth safely.  If a team left Paso Real to go to another town, they ended up being blocked and there was no other road to get to Cofradía.

All of what I've just explained to you was done to set up for the teachable moment in THE REFUGE.  There was only one way to Cofradía (once they got to Cofradía, they immediately entered THE REFUGE).  There is also just one way to get to God.  God is our Refuge.  Pastor Luis did an excellent job explaining this to all the students and in the end, nine students gave their lives to Christ.  It was an excellent evening!!

By the way, the Bible says not many will actually give their life to Jesus Christ.  Interestingly enough, only one team made it through the labyrinth.

Click on this video that Max put together to see some of the action!