SEE A REPORT OF WEEK ONE HERE.

Thirteen more students arrived this week to make the total at 65.  Instead of a race from Cofradia to Arrayanes, this year we decided to make it a hike in the woods through mud, trails, cow pastures, and harvesting fields.  Each team was to arrive at four different locations where they would perform an activity and then move on to the next one.  The final destination was an impromptu stop at a well-known and used spot to swim and dive in the river.  This was a great refreshment after having made the treacherous trek through the mud!

The first location led by Martin was at the baseball field in Cofradia.  The activity was to throw water balloons at their captains.  It was actually to make the water balloon land inside a target, but if they hit their captain, they gained more points!

From there, the teams hiked through the woods, fields, and muddy trails to get to a cow pasture owned by Hugo where he led them in their next activity.  As they arrived, each team was to  walk across a 30 foot long obstacle made of short posts, a beam, and then again short posts.  If the team fell, they had to start over again.  The team that made it across the quickest won.

From Hugo's cow pasture, the teams made their way through some deep puddled backroads to arrive at a slimy mud pit for a tug-of-war tournament organized by Pastor Luis.  In the end, The Preventers won the muddy battle.

After the thrilling contest, the teams continued on in those deep puddled backroads and muddy trails to another cow pasture owned by Hugo where Sandy was waiting for them with her activity.  Blindfolded, they were to find balloons filled with water hanging overhead.  They received points for each balloon they found until they came to one filled with paint which ended their activity and gave them a 1000 point bonus...and a new look LOL!

Once the teams had completed all the activities, nearly 80 students and staff took some down time at the river.  A refreshing way to clean off all the mud!

Finally, The Refuge was again another hit as the students played games and chatted while the staff served them juice and hotdogs!  Max led everyone in a couple of songs and Pastor Luis shared with them a message.

Then, off to vote for a team to do chores and dismissal.

Check out this incredible video that Max put together of the events of week #2!

Here are a few photos that were taken... 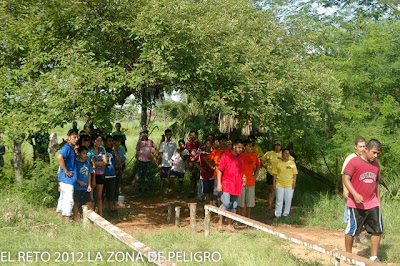 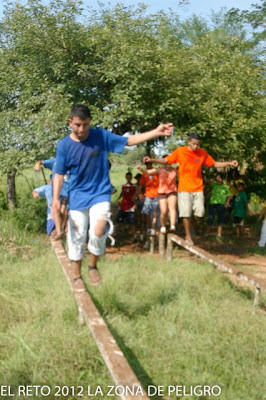 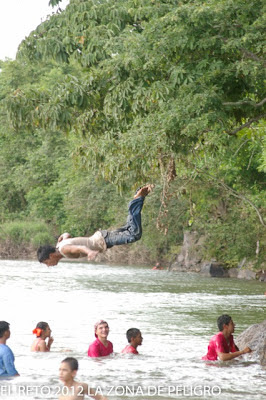 CLICK HERE TO MAKE A DONATION TODAY
Posted by The Silbermans at 2:40 PM